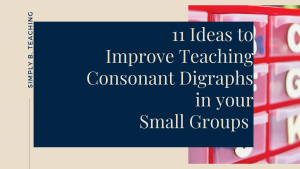 Consonant digraphs are a staple in the English language but they can be tricky for students to learn! If you’re anything like me when I started teaching, often you’re learning these phonological concepts with your students.

If you’re looking for some easy and effective activities to teach consonant digraphs, check these out! Featuring 4 weeks of lesson plans, each digraph is broken down into simple lessons that guide the students from introduction to mastery.

When teaching consonant digraphs (or any new concept) it is helpful to break it down into a single key phrase. Repeat this phrase often when teaching and soon you’ll hear your students repeating the key phrase when needing that phonological concept while reading or writing!

When a student asks me “what is a consonant digraph” my key phrase response is “A digraph is TWO letters, stuck together to make ONE sound”. Consonant digraphs are generally taught after students have mastered individual consonants and have some understanding of short vowels. Most commonly the digraphs ch, sh are taught first, followed by th and wh, and ph is taught much later.

Now, say “slip”. Say it slowly and you should hear /s/ /l/ /i/ /p/. Both s and l are clearly heard in the word and are using their most common sound. Sl is a consonant blend.

Use a whiteboard or pieces of paper to create a simple digraph vs. letter sort. After learning about letters, students are often hyper-focused on seeing individual letters but with digraphs, they need to be able to see letter patterns. Write individual letters (be sure to include: h, c, t, s, and w!) and digraphs (sh, th, wh, ch, and ph depending on level), then have students erase or sort the cards based on their directions.

This is a great activity to do as a blind sort. Give the students the cards and ask them to sort them in a way that makes sense. Often, they will discover that some cards have two letters while others have one. This is a wonderful opportunity to discover consonant digraphs while also explicitly teaching how they work.

Once students are able to identify consonant digraphs and their sounds in isolation, they are ready to begin blending words! Using the same cards as above, you and the students can build words and point to the sounds as you say them. After point to teach sound, slide your finger across and put the sounds together to make a word.

Be sure to blend both real and fake words to have students understand how consonant digraphs work, even if they don’t recognize the word. More often then we realize students are using memorization to read simple words, rather than sounds. While this is effective with simple words like “ship” eventually the student will struggle to read when he or she encounters an unfamiliar word with a consonant digraph like “shortcut”.

So you’re students are able to identify consonant digraphs and their sounds individually, and they can blend those sounds into real and nonsense words. What comes next? Readers need to be able to think critically as they read. We need students to use their letter sound knowledge to be able to read the word, and their critical thinking to process it’s meaning. Nonsense words with consonant digraphs are the perfect way to do this!

Using a variety of searches, and sorts you can support students learning of consonant digraphs through reading and identifying real and nonsense words. Read more about the importance of nonsense words here.

Your students have come so far with these consonant digraph activities! They know what a digraph is and how it acts, along with how to think critically about digraphs when they appear in individual words. The next step: put those digraphs into action!

Click here to learn the best way to use decodable readers to teach any concept!

So, the best decodable readers to teach consonant digraphs are those that the main focus is digraphs! Yes, these books will often feature sight words so the sentences make sense and flow but often these common words can be sounded out with digraphs (ex: this, with).

These decodable readers are perfect for teaching consonant digraphs. Featuring beginning and ending digraph sounds along with simple, easily decodable text and common sight words. These books will help your students focus on the digraph sound and apply their newly learned phonetic skill!

Research shows kids learn best through play, so here are some great consonant digraph games! All you need is a paper and pencil, or whiteboard and marker, and you have great, research based games to improve your students consonant digraph activities.

To make a strong consonant digraph game it should be simple and digraph focused. The students should not have to think about the rules, or other words in the game. Those concepts should already be mastered so the only thing their brain is focusing on is the digraph sound.

This game is a huge hit and can be play so many different ways! Take a stack of cards and write real and fake words, featuring digraphs. Use these cards to have kids complete sorting activities, matching games, or building sentences games. My students love picking a nonsense consonant digraph word and making a meaning for it! Reading nonsense words allows students to target the consonant digraph sound and apply its rule without using their memory bank of words.

Read more about the importance of nonsense words here.

Word ladders are a wonderful way to teach consonant digraphs. To build successful word ladders, students should already have a strong knowledge of the digraph sounds and using digraphs in CVC (consonant-vowel-consonant) words. A word ladder (also known as word chains) is when you can swap a single sound and build a new word. For example: shin, replace /sh/ with /th/ and it becomes thin. Building and solving word ladders allows students to focus on the digraph sound in different word location, along with building important blending and fluency skills.

Determining between real and fake words allows students to apply their consonant digraph knowledge and think critically about the sounds when they are reading. These hidden digraph pages help students build close reading skills as they think critically about the words and if the word is real or fake. As they color the real words, a secret digraph is reviled. It’s like a consonant digraph treasure hunt!

Who doesn’t love a good write the room activity? It gets your students up and moving while learning consonant digraphs! Use your real and fake cards and hang them up around the room. Give your kids a piece of paper and have them draw a grid. They can write “real/fake” at the top, “beginning/ending”, or each digraph sound (sh, th, wh, ch) and sort the words as they walk around the room. This is a great activity for kinesthetic learners!

With many students opting to learn online, it leaves teachers asking “what consonant digraph games can we play online?” Before leaping into online games, it’s important to explicitly teach each digraph sound and how it works in words. These are some great ways to teach and practice digraphs online!

Use these google slides to both explicitly teach and practice the consonant digraph sound. Featuring audio on each slide, students are introduced to each digraph sound and are slowly asked to incorporate this sound into their reading and writing.

Boom cards are a great way to practice consonant digraphs! Once you’ve created a free account on boom learning, you can easily assign a fast play link through your learning platform for students to practice isolated digraph sounds. If you want more data collection, boom learning offers a paid subscription as well.

You can’t forget to have students apply their consonant digraph knowledge online! These decodable readers are perfect for students to use online. With a unique, leveled, story for each digraph sound these decodable readers allow the student to practice the target phonics skill, without being overwhelmed with other skills needed to access the text.

So, now you know everything about consonant digraphs and how to teach it to your students but what does the perfect schedule look like? Well, good news – you don’t have to think about it! You can grab this tried and proven schedule for teaching consonant digraphs. These lessons feature a week on each digraph sound, but also includes a one week version featuring all digraphs if you find yourself short on time.

What’s your go to for teaching consonant digraphs? Share below!

Subscribe to our newsletter to get updates on all my latest teaching resources, teaching tips, and some free goodies!

Hi, I’m Maggierose from Simply B. Teaching and I love all things small groups instruction!

Click here to download your FREE guide to mastering small group instruction. It features 7 easy tips and tricks you can start using TODAY!